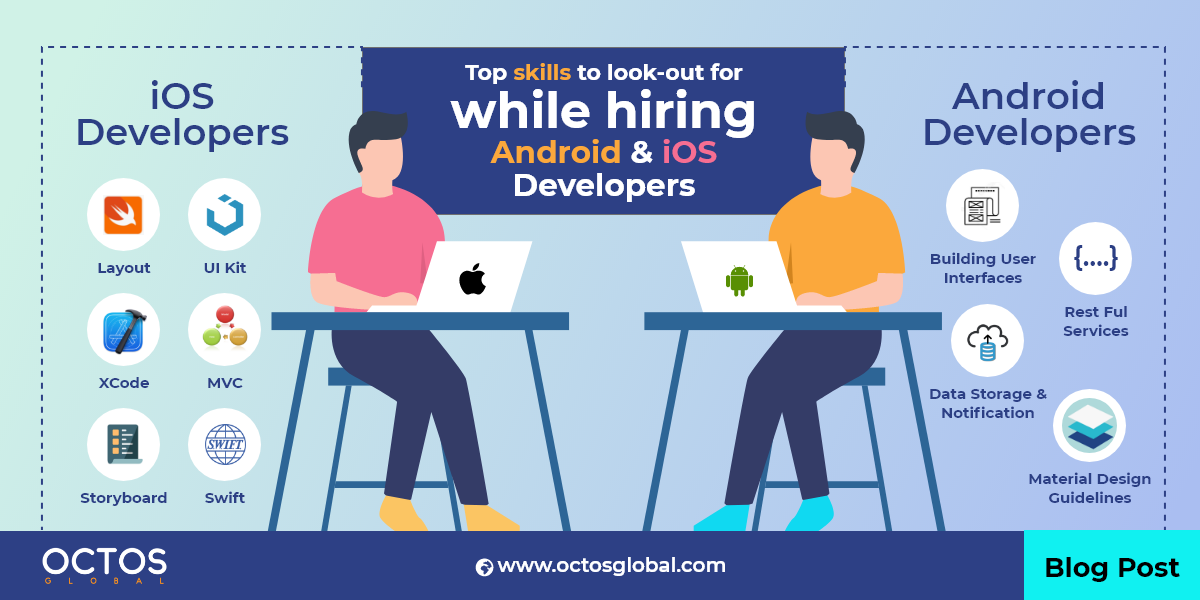 It goes without saying that the mobile market and app development market is growing at a tremendous speed. Currently, Android is dominating the market with 87% of the share. For app development companies, it becomes very important to stay relevant and constantly be on their toes, in order to remain competitive.

Thus, while being an Android/iOS app developer is a fruitful career, it also is very competitive. Every year we see new technologies making waves in the market. It is imperative for an App developer company to hire those app developers who are skilled and someone who can stand out from the crowd.

Here are few crucial skills that HR at App Development Company should look out for when hiring Android and iOS Developers:

1. Should have knowledge of different programming languages:

It is very crucial that a developer should have in-depth knowledge about programming languages. Generally, Apple iOS developers use Objective-C & Swift while Android developers use Java & Kotlin. Also, they must have knowledge about multiple programing languages. This is a valuable and essential skill that would help brush your abilities as an app developer. Also, the developers should stay keep themselves updated with the same. 2. Should have analytical skills:

Analytical skills mean problem-solving skills. A good and talented app developer should have the ability to solve complex problems. It is vital for them to be able to analyze the market, the need for the app, how it should be presented in the market, and so on. Here, a developer should combine analytical skills with creativity, which would help uniquely build the app.

3. Should have knowledge about UI/UX Designs:

One of the most crucial parts of building a good app is the user experience it provides. The overall look, the functionality, and the navigation part should be designed keeping in mind how the end-users would use it and how they need it to be. Well-designed apps and those apps that offer easy functionality are less likely to be uninstalled by the users.

4. Should have knowledge about commercial value:

There is an immense need and demand for having multiple applications of different purposes on both Android and iOS devices. Whether it is a small start-up or an established company, having an app works wonders. An app developer should have knowledge about the business aspect of having an app and how it should be put out in the market. In addition to being able to create the app, being able to pivot the commercial aspects of it also works wonders.

Thus, mobile app development is an upcoming and exciting field that requires the right blend of soft skills and technical skills. For a developer to stand out from millions of other developers who have the same abilities as him, it is necessary for him to regularly keep working on these skills, which also helps him stay relevant. Any recruiter should look out for the skills mentioned above that would add value to their organization.