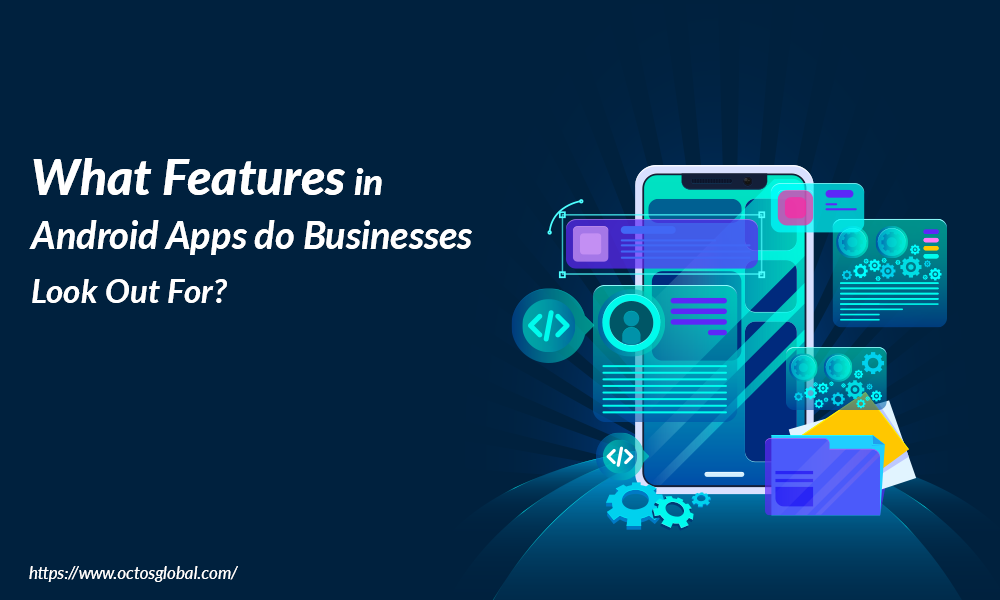 What Features In Android Apps Do Businesses Look Out For

Android continues to dominate the mobile platform landscape, with business houses streamlining their functionalism with dedicated mobile apps. In recent years, Android application development has undergone several upgrades, with cloud-based apps, instant apps and now IoT penetrating into the domain. Android, with a market share of over 85%, leads the landscape and the reputed developers are carrying out a good work, strengthening their client’s business applications. For every modern enterprise, mobility has turned out to be a crucial aspect, with customers spending more time with their smartphones than computers. As a business leader, you must be on the lookout for the most updated features to be incorporated in your Android apps.

Here are some of the features that established businesses look forward to have in their apps.

You must note, that most of the smartphone users do not use all their apps on a daily basis. A report released by TechCrunch reveals that on an average, a person uses only 9 apps on their smartphones each day. In order to do away with the issue of apps occupying unnecessary space in the phones, Google launched Android Instant Apps in October 2017, where one could use the app without even installing it. Since then, business firms have been integrating this feature into their apps, so that they can serve a purpose without adding to the junk on the users’ devices. Presently, most of the leading firms are collaborating with a reputed Android app development company to develop instant apps for their business.

The e-payment industry is striving to turn the transactions completely cashless. In this context, it is important to note the rising demand for secure payment mechanisms through apps. Integrating the payment mechanism through mobile apps in each business greatly enhances the ease of making transactions. Often, customers move to a different website due to the lack of proper payment gateway in an app. With more businesses embracing this feature, mobile app payments are gradually making the way into the mainstream. It is important to understand the desired payment option of the customers and integrate the channels into the gateway. However, it is challenging to develop secure mobile payment apps. Business firms should collaborate with accomplished Android app development companies for this particular feature.

Android application system based on cloud

Cloud-based mobile apps have been in the industry since 2016. However, the buzz will continue in 2019 as well, as ‘data’ is an important element in the operational mechanism of every business. As a business professional, you must realize that the information needs to be stored securely. The cloud-based mobile apps for Android greatly leverage this point, while allowing access to the desired personnel simultaneously. In case you have not yet got a cloud-based app, it is time to get one. Reach out to one of the companies specializing in Android app development in Orange County and develop a robust cloud-based Android app for your business.

By 2020, the world will be having over 20 billion connected devices, thanks to IoT. With IoT integrated mobile apps already in the market, the trend is gaining popularity swiftly due to the security it assures. Several home automation businesses have been using IoT apps these days. Google has already made contributions to the development of AI and IoT. In the coming years, it will be looking forward to develop more IoT apps for Android. These apps will enable you communicate with your customers smoothly, while managing a secure backend.

Business apps integrated with augmented reality and virtual reality are likely to dominate the Android application development industry in the coming months. Ever since the craze created by ‘Pokémon Go’ faded away, business firms have been collaborating with the Android application development companies to include similar features in their apps. AR is growing at a greater pace, as compared to VR. Incorporating VR and AR into your apps will be effective in attracting customers, besides lending an edge to your business over your competitors.

Users prefer using mobile apps, as compared to mobile web, which makes Android apps one of the best ways to help a business engage with its customers. It can result in a substantial improvement in sales. With every updated version, Android has improved with its array of offerings. In 2017, Android Oreo emerged as the 15th version altogether, as a faster, more secure and powerful version.

You may get across to the reputed companies specializing in Android app development in Orange County to integrate the latest features in your business applications.